Why Fetishizing AAPI Women Is An Act Of Violence 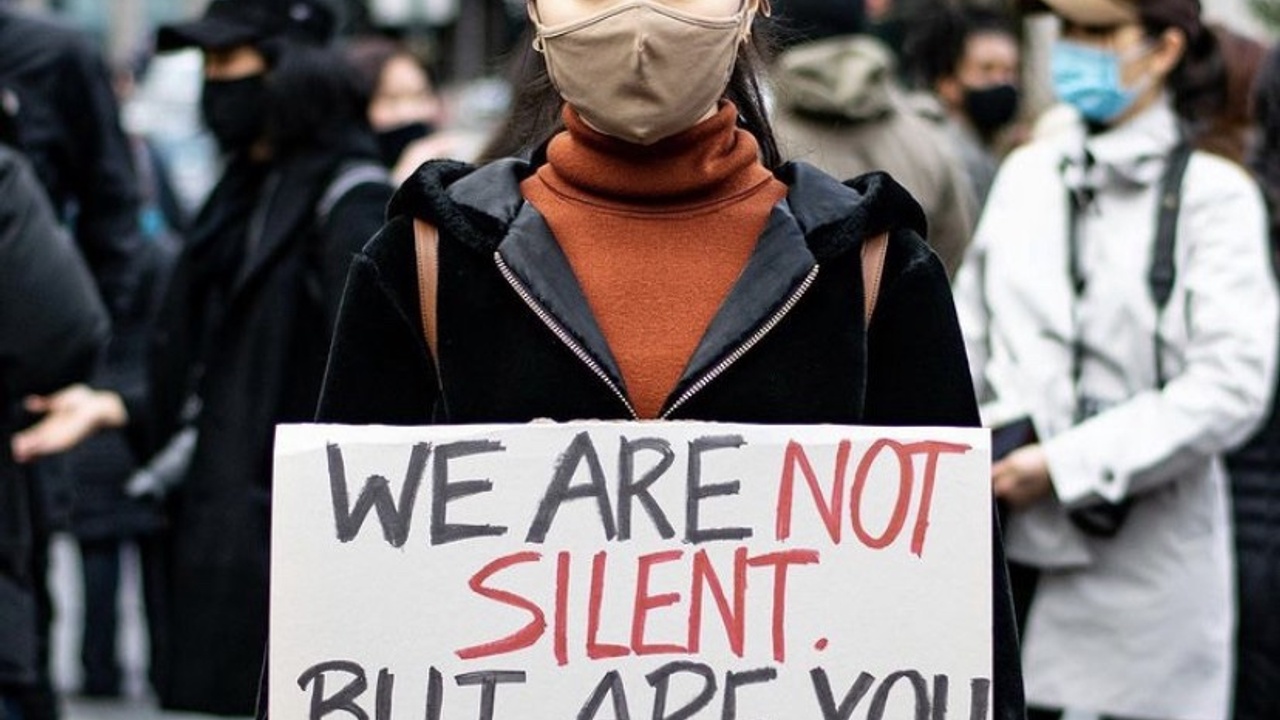 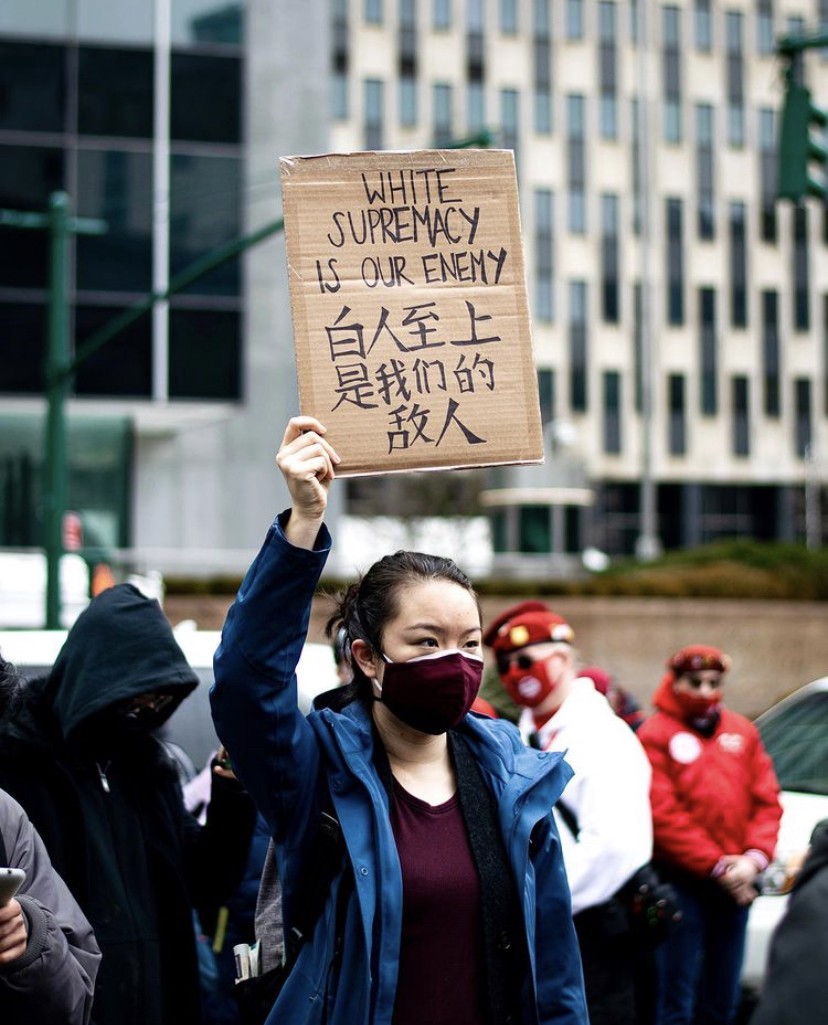 This week, we were rocked by the mass murder of Asian American and Pacific Islander women by a white supremacist male. This act of terror was preceded by a year of violent and aggressive acts against the AAPI community as a whole.

This terroristic act was both racially and sexually motivated. Although some dispute the racial tone of the murder, the history of the sexualization of Asian American and Pacific Islander women is very clear. White colonization and imperialism are the roots of today’s sexualization of AAPI women and therefore, these acts will always be racially motivated.

The Invisible History of Sexualizing And Fetishizing of AAPI Women

For many marginalized communities, historical narratives are often distorted, untold, or muted to uphold white supremacy. It is the same oppression for the Asian American and Pacific Islander Community. What we don’t learn about in school is the deep history of sexualization and oppression of AAPI women’s bodies.

The use of AAPI women’s bodies is pervasive and centuries old. Chinese concubinage has been a practice for centuries, dating back to as early as the Eastern Han period, and continuing today. Women concubines were bought by high-class and status men, and expected to serve and bear children for these men. 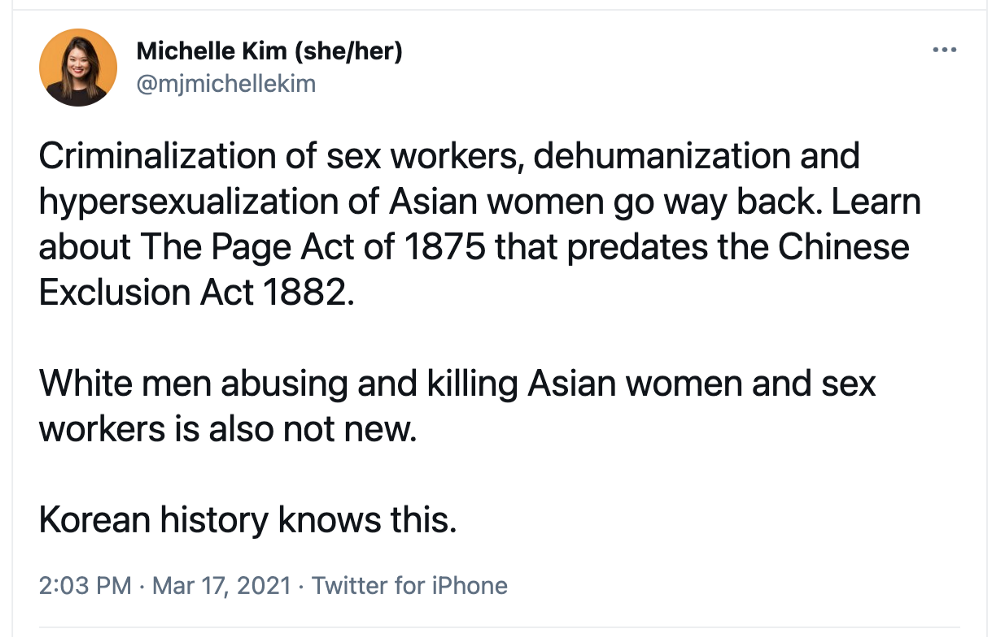 Possibly one of the first occurrences of sexualization in the US was the Page Act of 1875. This act was passed before the Chinese Exclusion Act, which barred all Chinese immigrants. The Page Act first prohibited US citizens from recruiting laborers from China and prohibited Chinese women coming to the US for “lewd or immoral purposes,” which would be considered prostitution.

The Act not only restricted immigration and increased racial discrimination practices — it cemented the sexualization of AAPI women and furthered a stereotype that all Chinese and AAPI women are sexual and threats to marriage.

A little over a decade after the Page Act, the Philippine-American War erupted, prompting the first wave of US military imperialism in Asia. Colonization and imperialism did not just conquer and destroy land and homes. Like conquerers before them, the men overseas also sought to conquer the Filipino women, viewing them as “submissive and subservient” to the white colonizers and imperialists.

Colonizers and imperialist also misconstrued the role of the Japanese Geisha for prostitution. The role of the Geisha is to embody the culture and arts of Japan. As ambassadors of culture and high-class, they were often involved in banquets and entertained. The association with entertainment and men quickly converted to a distorted and false narrative that further portrayed AAPI women as sexually subservient to men.

These views did not stay in the land that was conquered. These views on AAPI women came back to the United States and further solidified the sexualization that was already laid from the Page Act.

The US imperialism also created the sex entertainment industry, which was reinforced during the Vietnam War when men were given “Rest and Recreation” time. Many went to Thailand and other South East Asian countries for “recreation,” which often included using and abusing AAPI bodies in the sex entertainment business. We see the views that US men had of AAPI women in a famous scene from Stanley Kubrick’s film, Full Metal Jacket.

Xenophobia, colonization, and white supremacy are at the roots of how the US has come to sexualize and stereotype AAPI women. These stereotypes of have been routinely pushed by the media, which largely characterizes AAPI women as “China Doll” — the “delicate, submissive and overly emotional” as noted by Joey Lee in an article unveiling stereotypes of Asian women. Other stereotypes often portrayed by the media include the colder, aggressive Dragon Lady stereotype and the Japanese Geisha, similar to the stereotype of the China Doll. All of these portrayals of AAPI women fetishize and sexualize them in movies, songs, and books.

The Trauma In AAPI Bodies

The sexualization and fetishization of AAPI women has been embedded in not only US culture, but also in Asian cultures as well. The trauma that many AAPI folks have experience is insidious and intergenerational, whether from concubinage, conquering and wartime sexual violence, or the continuation of sexualization and oppression.

Our bodies hold the trauma that our ancestors have experienced, our grandparents and our parents experienced — and that we experience. 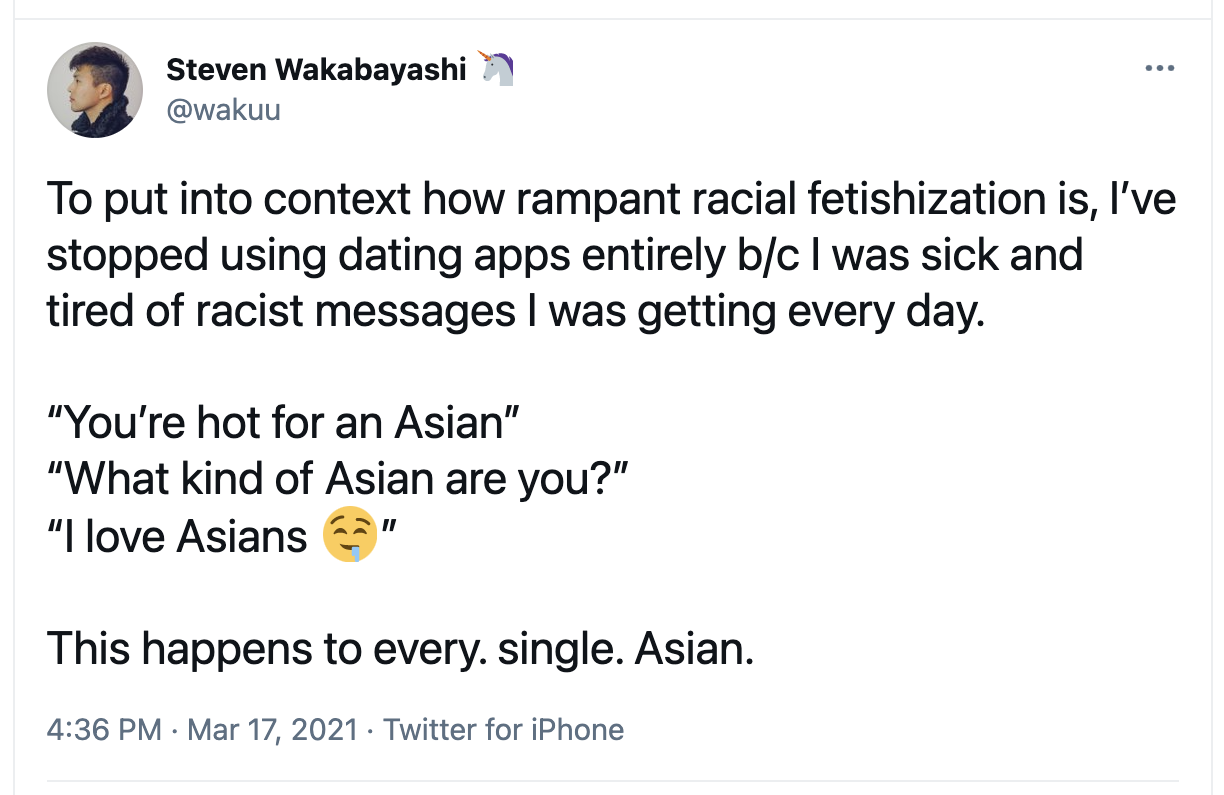 How Fetishizing Makes AAPI Women Vulnerable to Misogyny and Violence

These stereotypes are not only harmful — they’re dangerous. The sexualization and fetishization of AAPI women makes them more at risk for harassment, sexual assault, and violence. The most recent race and ethnicity data from the Polaris Project showed that Asian survivors were the second largest group to reach out for help on the hotlines with 715 individuals out of the 3,116 survivors who called.

The ongoing sex trafficking crisis puts many women of all different races and ethnicities in danger. AAPI women are also vulnerable to trafficking, for both labor and sex.

Understanding how the sexualization and fetishization of AAPI folks, particularly women but also men, plays into the vulnerability for harassment and sexual violence is crucial. How do men, particularly white men, view the bodies of AAPI women? Based on historical narratives and stereotyping, it is clear that the bias towards AAPI women puts them in a vulnerable position, as they are routinely sexualized in the media and history.

The bodies of AAPI women in the minds of white men especially are already oppressed, as they are viewed as submissive and subservient, or bodies to be tamed. Either viewpoint makes AAPI bodies a trophy, either by being the one to tame the “dragon lady” or the one to win the heart of the “China doll”. 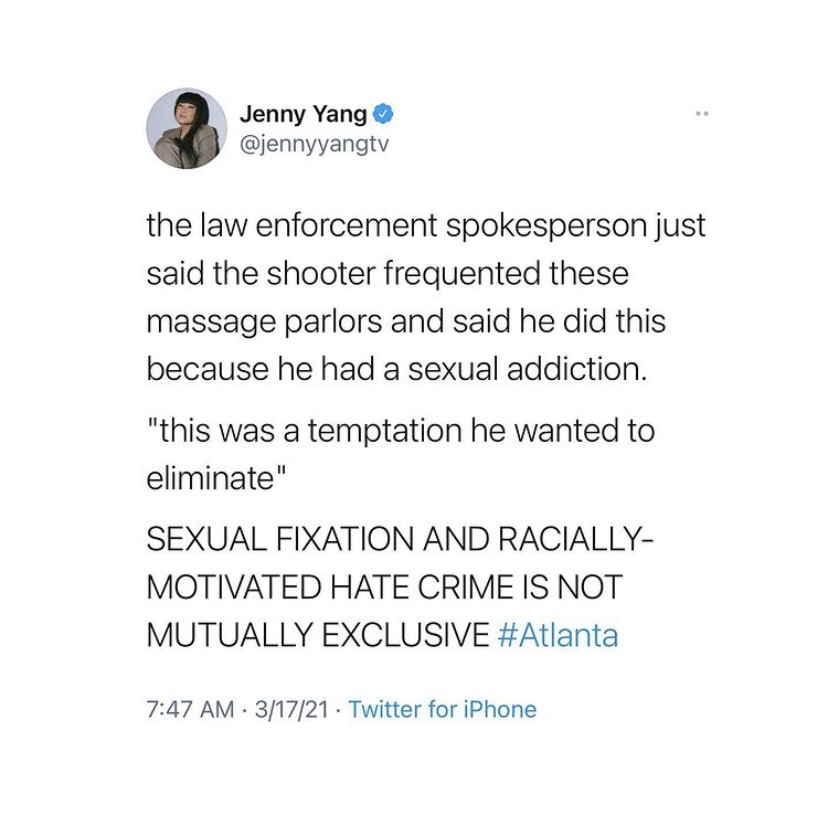 When we understand how AAPI women in particular are sexualized, we take note of how race and gender intersect, and that sexual violence increases when these two identities intersect. As stated in Shaila Dewan’s New York Times article, “racism often takes the form of unwanted sexual come-ons, and sexual harassment is often overtly racist.”

In another article for the New York Times, Audrea Lim calls out the alt-right’s fetishization of Asian women in particular. Lim points out several alt-right leaders who fetishize AAPI women, and says,

The second myth is that of the subservient, hypersexual Asian woman. The white-supremacist fetish combines those ideas and highlights a tension within the project of white supremacism as America grows more diverse — a reality that white nationalists condemn as “white genocide.”

She goes on to say that some comprises seem to be okay along the way because the alt-right finds that white women become too “feminist”, while, Lim contends,

Asian women are seen as naturally inclined to serve men sexually and are also thought of as slim, light-skinned and small, in adherence to Western norms of femininity.

The parallels between the historical roots of these stereotypes and how they play out in white supremacy today are clear. White supremacy has continued to uphold and push both the “model minority” and the “China doll” stereotype, leading to an increased fetishization and sexualization of AAPI women and further putting them at risk for sexual harassment and violence at the hands of white men.

Sexual harassment and violence can be a form of racism that needs to be recognized. Our bodies’ liberation and our sexual freedom are dependent on the dismantling of white supremacy and racism.

The Shame In Being Sexualized And Fetishized

There is a lot of shame associated with being sexualized and fetishized, whether or not a person uses their body sexually or not. Shame is deeply rooted in many Asian American and Pacific Islander communities. Sexual shame is especially deep.

The sexualization and fetishization of women often leads to more shame. As AAPI experience sexual harassment or internalize these stereotypes laid upon them, the shame deepens no matter what actions they take.

There is shame in talking about sexual advances and sexual harassment. There is shame associated with even being perceived as a sexual being. Dismantling shame is a large part of dismantling white supremacy, as we must first dive inward to recognize our internalizations.

Our own ideas of shame can also help us recognize our own biases and judgments, either about ourselves or about those are in marginalized bodies. When we acknowledge our own sexual shame, we can discover a newfound compassion for those who experience it as well. 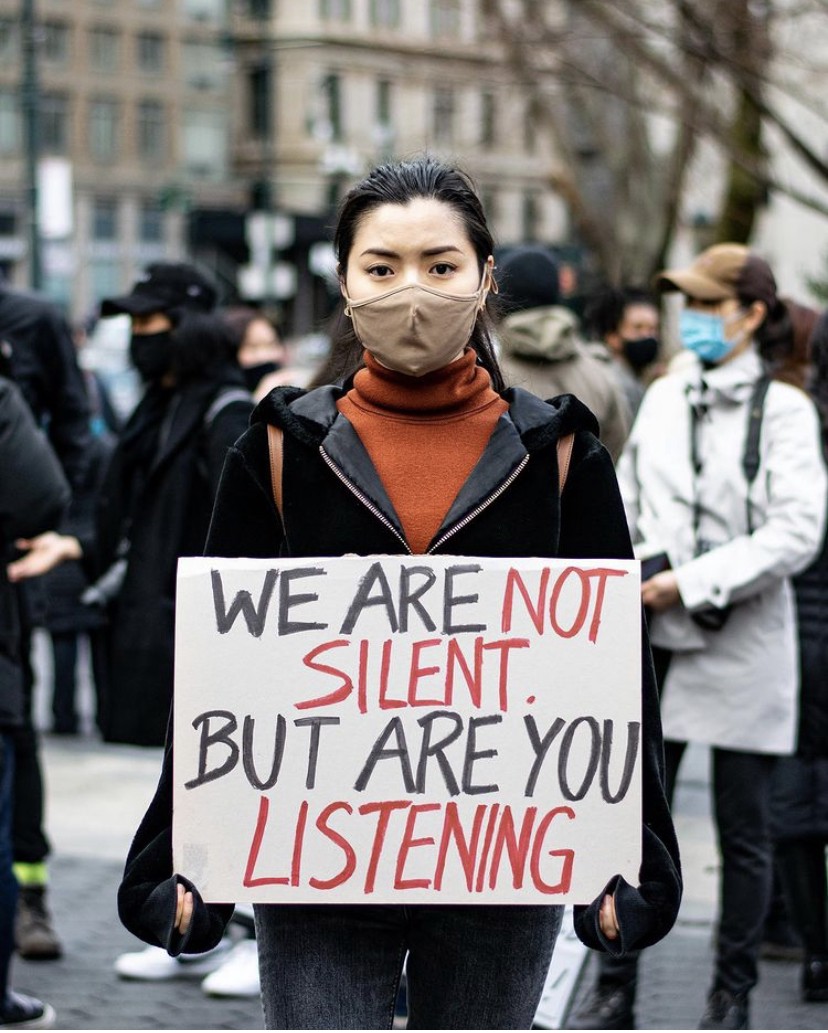 Taking action is imperative, especially when a community is experiencing violence. Mindfulness guides our actions both on and off the mat.

One of the first and most important actions we can take is naming what happened and calling it what it is. When we name things, they often dismantle in the light of exposure — whether they’re feelings or systems of oppression.

Naming the roots of colonization and white supremacy in these acts of violence is important. It was not just a murder. It was an act of racism, topped with white supremacy and rooted in colonization. The violence we saw this week is a microcosm of these oppressive systems we have built. Naming them, exposing them is not only honoring the victims of this heinous murder — it also begins the process of dismantling the structures which are at cause.

We learn to build compassion through mindfulness. Often we find specific mantras, affirmations, or meditations dedicated to the cultivation of compassion. It is also a practice. The beauty of our mindfulness practice is it gives us the ability to pause, take a step back, and reflect. We drop into our minds and bodies. Sometimes, we can ask, is what I am saying or doing compassionate towards this person or community?

Reflecting on our biases and judgments uncovers our own blockages and obstacles in the way of compassion for communities that need protection and support. When we acknowledge these obstacles, we can go back to naming and exposing them, and begin the process of dismantling their roots.

Questions For Reflection — For Non-AAPI Folks

What biases or judgments are blocking me from compassionately showing up for the AAPI community or sex workers?

Am I willing to call out misogyny and white supremacy? If not, what obstacle is in the way of exposing these systems of oppression?

In what ways do I benefit from these oppressive systems?

In what ways am I also harmed from these oppressive systems?